As a Malaka Team we play in Polish Squash League. 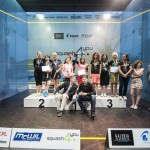 In the season 2012/2013 Malaka Squash Team A advanced to the finals Polish Team Championships. At the last, fourth queue PLS, has confirmed that is the best in the district of Silesia, and thus takes the first place, which gives it the spacing in the finals of the DMP with a number 1-4. Congratulations to all participants! And especially the players: Pavel Sládeček, Maciej Klis, Nadav Tannen, Przemek Atras, Michael Kędzierski and Wacław Staszkiewicz.